I was recently having a conversation with a friend of mine who is a realtor. We were discussing how difficult it is to get someone to answer their phone, or return a phone call in this day and age. Interestingly enough, with our "instant gratification" society, you would think that more companies would be listening to their customers (I can name a LOT of companies that people complain about not being able to reach a live person) and try to come up with some realistic ways to go about satisfying both there 24/7/365 Internet only customers, as well as their, "I need to speak to a live person," customers.
I've said this once, and I'll say it again. For every 100 people that want to do business exclusively online with little to no contact with a human, there are at least 10-20 people who DO want to have live contact. A lot can be lost and miscommunicated via emails, text messages, twittering, and other forms of non-human communication; therefore, nothing can take the place of a live person (via phone or in-person).

In my business, people want to know that if something goes wrong they can get a hold of someone within a relatively short period of time. Being accessible via the phone is like having insurance; nobody really realizes just how important it is to be able to reach someone via the phone, until they need to reach someone via the phone. I'm accessible to all of my clients through whatever medium they prefer. I may not be available 24/7, but I do pride myself in getting back to my clients within a relatively short time frame. With that being said, I don't mind the email only clients no more than the ones who prefer to speak directly on the phone. I believe you need to do what is best on an individual basis, and provide multiple options; versus just foisting a "once size fits all" way of doing business. Now, go back to work and answer your phone!

Posted by That Chick Té at 9:33 PM No comments: 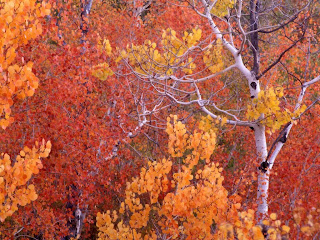 September 21st marks the first day of Fall. I love every season, as they each have their own unique qualities; however, Fall is one of my most favorite times of year (yes, it's football season). If you live in an area where there are lots of trees, then you will see the changing of the leaves; there is a crispness to the air, and then there are an abundance of delightful food smells that will begin to permeate the home such as - cinnamon, vanilla, cloves, and other wonderful baked good items.

Fall is also a great time to get exceptional rates on travel. School is back in session, so a lot of areas that were packed for the summer are now taking a deep breath and seeing a decline in their patronage, so to combat that, they decrease their rates or offer great promotional incentives. Also, this is the perfect time of year if you are Ireland bound, as it's less expensive, and while it may be rainy (as always) you can score some incredible rates for air and lodging, while enjoying a pint or two while you are there.

Kick back, relax and get away somewhere special during this wonderful time of year!

(www.chicksthattrip.com)
Posted by That Chick Té at 11:35 AM No comments: 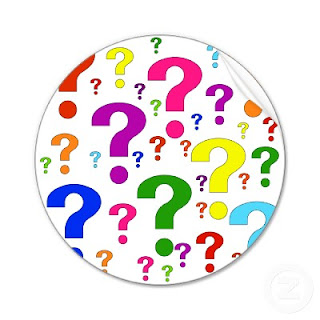 Despite the horrible economy, there are always those who are attempting to separate us from our hard earned cash! There are scammers EVERYWHERE and they aren't going anywhere; they will become increasingly more savvy as the consumer becomes savvier too.


I'm a skeptical person by nature, so it doesn't take much for my "spidey" senses to start tingling. If I receive anything in the mail and/or email regarding an unbelievable deal, I become even more leery. These scammers are becoming increasingly inventive, and they are no slouches because they know (especially in this economy) that people are desperate to have a great deal, but not wanting to sacrifice staying at a undesirable location, or cruising on a sub par cruise line. Some of these companies are using the credentials and logos of reputable companies in their mailings and attempting to pass off their timeshares, etc, to unsuspecting consumers.

As a travel professional, the most sage advice I can give anybody is to do your OWN research and due diligence. If you receive a flyer/postcard, etc, in your mail or email, make sure you are getting what you think you are paying for. If you have a travel agent that you work with, make sure you contact them with any of these "deals" because oftentimes we are aware of unscrupulous companies out there, and we can let you know if that "deal" you've received is actually from the company you believe it's coming from, and if it's being honored. Are there companies out there that buy cruise line overstock or hotel rooms that haven't sold? Absolutely, but again, you must be careful, because that great trip you think you've booked on X cruise line, or with X hotel, may turn out to be a less than stellar "deal" you thought it would be.

Posted by That Chick Té at 3:16 PM No comments: 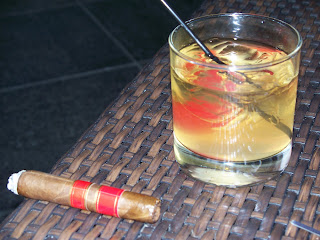 I don't know who started the expression of, "Save the best for last," but I have to disagree with them, because I like to put the best right up at the top (see photo above) - so it's not missed. This past weekend I had a complimentary night at a Sheraton property, so I selected to stay at the Sheraton in downtown Denver. This isn't a review showcasing the property; however, I did add some of the photos of the property and the room, and one of their bars called 16Mix Lounge.
While the Sheraton property was relatively clean (there was trash in the trash can of my room????) It's not necessarily a property that would ordinarily appeal to me; however, I can say that for families or business traveler(s) it's great because it is:

I did not like the intricate, maze like way you had to get to the Tower I was staying in on the property. It's confusing and quite frankly, annoying. I had to go down one level; walk across the very large expanse of their conference/ball room areas to the other side, to elevators that were connected to the Tower area of the property.

I am from Colorado, so I decided to go to a few places I'd never been to before. I stopped into the Paramount Cafe on the 16th Street Mall. I had a mimosa, and while browsing the menu, I determined I really wasn't that hungry so I would wait until later to eat. The brunch menu was available at the time I was there, which consisted of a small array of pancake, French toast and egg dishes. I peeked at their regular menu, which consisted of typical appetizer dishes (wings, spinach & artichoke dip, nachos, and other small plate fare). They also had a nice selection of salads, sandwiches, and interestingly enough, they also had several mediterranean style dishes on their menu as well.

After I left the Paramount Cafe, I strolled amiably down the mall area; intermittently receiving phone calls. I poked my head into a few stores and restaurants. On this particular Sunday afternoon and evening, there was an early Colorado Rockies game, and an evening Broncos vs the Steelers game. Throughout the day I saw quite a few Steelers paraphanelia and jersey's being worn by those I assumed were likely going to the game.

Several hours later of my roaming the streets, I decided to check out The Tavern on Market street. It's owned by a group that has several restaurants throughout the metropolitan Denver area. Each of their restaurants have different menu items, so I know they have great bar food, and that's exactly what I wanted - and a beer or two...

Their rooftop bar area is HUGE. This location is directly across from the Rockies stadium, so everytime there was anything going on, you could hear the roar of the crowd. I sat down and had a Bud (it was on special, as it's not my beer of choice), and watched the remainder of the Golf tournament and soaked in the lovely day. I eventually ordered two of their awesome slider sandwiches, as well as (gasp) a basket of their fries. They have added a new assortment of sliders to their menu, so I tried the chicken slider, and the philly cheesteak slider. They were yummy, and hit the spot, and for $1.00 a slider (on Sunday's) that was a good deal!

After spending several hours at the Tavern, I decided I better make my way back to the hotel so I could enjoy the game and the Rocky Patel cigar that had been burning (not literally) a hole in my purse. In not my brightest moment, I had on high heels, and while the Tavern isn't far from the 16th Street Mall, it's not close when you are walking in 4" heels! Trust me, I typically always bring along a pair of my ballerina flats, but on this particular day I'd forgotten, and my poor feet paid the price.

I arrived at the small gate entrance to the 16Mix Lounge. It was getting cloudy and breezy, but I wanted to sit outside and enjoy my cigar before I started watching the football game - priorities! I stepped into the bar area and ordered a Jack Daniel's Whiskey Sour, and took it outside and lit my cigar. Ahhhhh...that's what I call the perfect ending to a laid back day. The patio area is actually on 16th street (hence the name 16Mix Lounge). I read a review about the bar before going (hey, I have to know the bars...) and one of the comments was (paraphrasing), "What a great bar; to bad it's connected to the Sheraton." My sentiments exactly. It's a bar that could have been plucked down in Los Angeles, California or Scottsdale, Arizona and competed with even the trendiest of bars. The decor of orange, brown and creams was well incorporated and subtle. While it wasn't a large bar, it was big enough. There were very few patrons at the time I was there, but it was a Sunday evening, so it didn't seem odd at all, and I enjoyed pretending that it was just my own private bar.

All in all, I had a great day. These are the moments that are taken for granted, but I revel in them and appreciate them at any opportunity. Now this is what a "staycation" is all about - cheers! 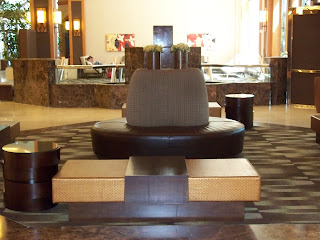 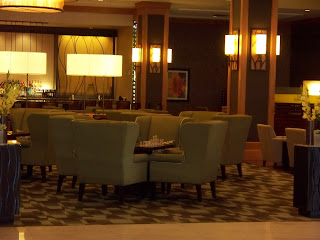 15Fifty Restaurant - off of the lobby area 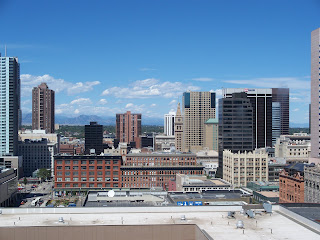 View of Denver's skyline from my room 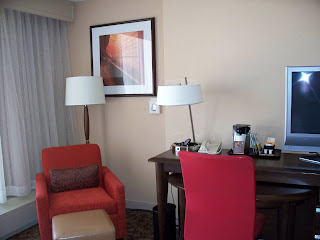 Desk area in my room 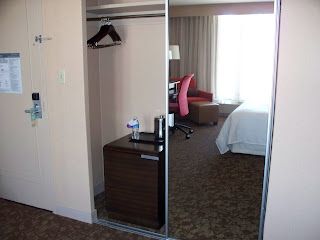 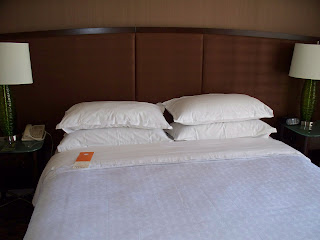 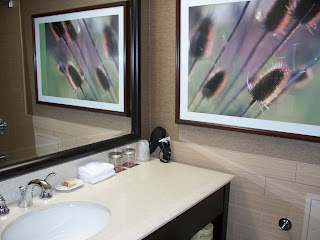 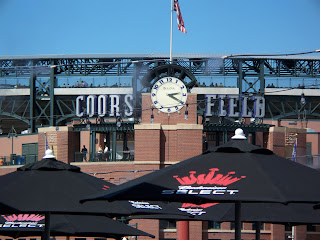 Picture of Coors Field from the Tavern rooftop 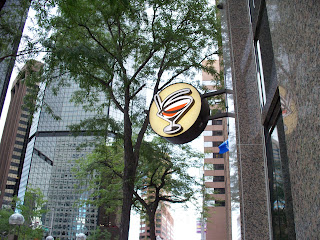 Outside of 16Mix Lounge 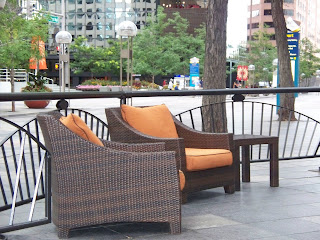 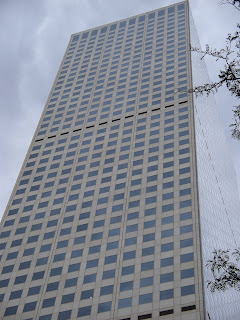 The dark sky awaiting the rain 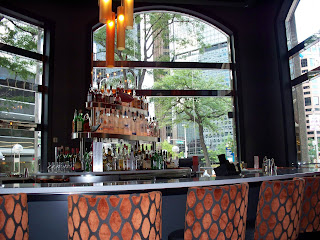 Bar seating area of 16Mix Lounge
(www.chicksthattrip.com)
Posted by That Chick Té at 2:09 PM No comments: