Wishing you and your family a food filled celebration
(and of course, football viewing)!

Whenever I visit the Phoenix area I seek out one of my favorite restaurants, Postino Winecafé, which is nestled in the Camelback corridor.

The first Postino Winecafé was opened in 2001, and I began going there in 2002. The owner, Craig DeMarco, and his lovely wife Kris were both there the majority of my visits during their infancy. Craig’s calm smile and low key demeanor were always a welcome sight. During the early years, Craig and I were both pursuing our MBA’s, so we would commiserate on the difficulties of having “work, life, balance.”

On this particular afternoon, I arrive right before they open at 11am. The parking can be a nightmare in this area; however, they do offer valet parking, so the patrons will not have to search high and low for parking if they arrive during the lunch rush. My friend and I notice that the staff is in their last minute prep to get ready before they open. I see Craig and walk over and shake his hand. He still has the same genial demeanor, but he has lost the wide-eyed wonderment he had when he first opened Postino; he is now a seasoned business owner. We briefly discuss his other restaurants, Chelsea’s Kitchen, located off of a canal, just a few blocks away from this Postino Winecafé location on Campbell street, as well as another Postino's that has opened in Central Phoenix. I compliment him on his successes and wish him many more. I get his blessing to write this article, and he says, “Make sure you say nice things about us.” I smile and tell him “I definitely will. What could I say that would be bad?”

My friend and I pull out the wine menu first and peruse the selection of whites. We settle on a mixed blend white wine and let our waitress know. They change their wines on a regular basis, so whatever I could recommend today may not be on the menu next week, month or year, but that is one of the concepts I have always loved. In respect to the food menu, I have favorites like the Mediterranean salad with added chicken, or a plentiful selection of Panini’s and Bruschetta’s topped with fresh produce, figs, cheeses and meats.

Knowing that I will not be back for awhile, I settle on my favorite: Mediterranean salad with chicken, and select just two Bruschetta's so I can have my fill of both. One is the Roasted Peppers with Goat Cheese, and I decide to try a new one that is on their menu that is a Burrata, Bacon, Arugula and Tomatoes.

The Mediterranean salad is wonderful, as expected, with crisp romaine lettuce, olives, onions, feta cheese and light tzatziki dressing melding together beautifully. The Roasted Peppers with Goat Cheese is difficult to eat, simply because the chopped peppers tend to slip off as you are biting into it, but that’s what a fork is for: so you can scoop up every divine morsel. The Burrata, Bacon, Arugula and Tomatoes Bruschetta is easily one of my new favorites; the saltiness of the bacon combined with the bite of the arugula is delicious. This one, like the Roasted Peppers, is a bit messy, just given there is so much going on, but that doesn’t stop me from devouring it with great aplomb.

Postino Winecafé is the type of place that every neighborhood dreams of having. It attracts a wide variety of clientele: residents who can walk over from the neighborhood, business professionals that trickle in from downtown Phoenix, and those of us who travel a farther distance, knowing that it is worth the trip. The first Postino was originally a Post Office, so during the spring months, before it is too hot, they raise the doors and the indoor and outdoor patio seamlessly become one with each other. The seating is abundant, with several outdoor patio and high top tables, sofas and other intimate seating arrangements inside. Postino does not try too hard with their décor. The concrete floor, multi-colored painted walls, and eclectic wall art make it – just right.

*Photos taken by That Chick Té ***For some unknown reason my photos have disappeared from this page; I apologize for the inconvenience. That Chick Té 9.3.2012

www.chicksthattrip.com
Posted by That Chick Té at 2:26 PM No comments: 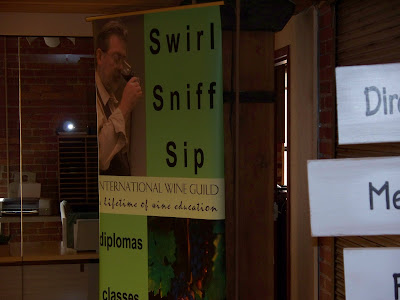 There are times in your life where you just have those, "Ah ha," moments. Mine came when I was met by Claude Robbins, GWM, MWE, President & Director of Education of the International Wine Guild. Claude was placing signage on the entrance of the building so that the other (potential) students would be able to locate them at their new facility. During our short elevator ride up to the wine open house, he explained some of the history of the Barteldes building, which has been in existence since early 1906. There are thick, trunk sized pillars throughout the entire building; Claude explained that these pillars helped to support the significant weight of the seeds that used to be housed at this location. Now, the Barteldes building is a snazzy office building, and the new home of the International Wine Guild.

The open house was being held in order to showcase the curriculum that is offered by the International Wine Guild. Let me be clear here, this is real work. While the idea of sampling wine sounds fantastic, their accredited program is one of the most aggressive and highly noted Wine Education programs in the US. They were praised in 2009's Food & Wine magazine, as one of the Top Five Wine Schools in the US for Professional Wine Education - not too shabby.

They have various programs available, so I won't go in to great depth about them since you can check them out directly at: http://www.internationalwineguild.com/. Needless to say, this Chick will be taking their level 1 Certification next Spring/Summer of 2012, and hopefully advancing to level 2 later in the year or the beginning of 2013. I appreciate that they have a multitude of programs and classes available for any level of student. Regardless if you've been in the wine industry or not, you'd be hard pressed not to find a program level that would suit your individual needs. 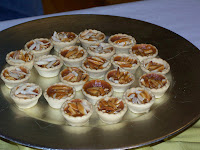 Claude's wife, Sherrie Robbins, ECW, is the Vice President & Corporate Executive Chef at the school. She supplied our group with a delightful spread of cheeses, crackers, meatballs, and other tidbits that tantalized my taste buds.*Sherrie will be a featured Chef in a new blog I'll be launching in early 2012 called Chasing Women Chefs, so stay tuned for more information. 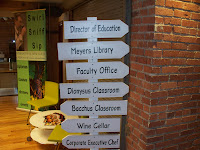 We were taken on a tour of their new facilities, and then were given a short slide presentation by Claude regarding all of their available programs. The space they are in is incredible. I felt warm and cozy as I noshed on some appetizers and sipped on wine. Claude explained that they had been housed at the Metropolitan State College of Denver, and had recently moved to their new space less than six weeks before my class, which was held on November 5, 2011. And while they loved being at the Metropolitan State College of Denver for many years, they were definitely enjoying their new space and making it their own. 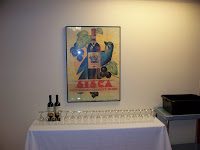 If you are a wine enthusiast, or a person who wants to possibly enter the world of wine, I would highly recommend checking out the International Wine Guild, you won't be disappointed.

I must confess, I try not to do shameless self promotion, but sometimes it just can't be helped! There is a new kid on the block called, travelhoppers.com. It's chock full of interesting topics, blog writings by traveling professionals, and information on how to reach travel professionals to help plan wonderful travel experiences all over the world.

I do some freelance writing for them, so I feel it's only right for me to give travelhoppers.com a "shout out!" There are some wonderful articles there to read, and should you decide to scoot on by, you can check out a few of my articles there too. The most recent article they've posted of mine can be read here at:  http://www.travelhoppers.com/2011/10/27/get-shopped-in-old-san-juan/.

Hop on over to travelhoppers.com and check them out.


www.chicksthattrip.com
Posted by That Chick Té at 10:43 AM No comments: